The power of Plandek’s enterprise-level metrics, analytics and reporting now available to all organisations

Plandek is intelligent, secure and easy to set up.

The key delivery metrics available on our platform.

Planked is used in a variety of use cases:

Achieving a 25% increase in velocity

Plandek at a $40bn data and publishing company.

Plandek at a financial software business.

Reducing Cycle Time by 75% and increasing deployments by 15% Latest from our blog

The application of data science to the challenge of optimising software delivery.

Plandek works with a network of trusted partners. We are a world leader in end-to-end software delivery metrics and analytics.

Founded in 2017, we are a UK-based data analytics business working with organisations across Europe and North America. Our team of data scientists and software delivery veterans apply data science to the challenge of optimising software delivery.

Our core belief is that software delivery is a complex engineering process – and like all complex processes – measurement is vital to optimise productivity, improve predictability and reduce risk.

The challenge lies in synthesising insight – both from the hard data residing within the toolsets used across the end-to-end delivery process and via feedback collated from engineers themselves – and presenting that insight in customisable forms to users from team level upwards. This combination of hard underlying data and engineer feedback is very powerful and can transform software delivery outcomes so that teams:

Charlie started his career as an economist working on trade policy in the developing world, before moving to Andersen Consulting’s Strategy practice in 1992.

In 1996 he joined the Operating Board of Selfridges, before moving to Open interactive TV in 1999 and then Sky in 2001 where he was Marketing Director until leaving to found Simplifydigital in 2007.

Simplifydigital was three times in the Sunday Times Teck Track 100 and grew to become the UK’s largest TV, broadband and home phone comparison service, powering clients including Dixons-Carphone, uSwitch and Comparethemarket. It was acquired by Dixons Carphone plc in April 2016.

He co-founded Plandek with Dan in October 2017. Charlie was educated at Cambridge University. He lives in London and is married with three children.

Daniel Lee has spent the last 20 years in the software industry following the completion of his PhD in Computational Fluid Dynamics and a period working as an aerodynamics engineer in Formula 1 and related industries.

He was a senior member of the team at Autonomy and served as Head of Applications – and then at Fast where he was Regional VP Europe and General Manager Media before Fast was acquired by Microsoft for c$1.2bn in early 2008.

Dan left Fast to co-found Globrix in 2007, one of the UK’s leading property search engines which was acquired by DMGT and rolled into Zoopla in 2010.

Dan then co-founded Artirix, a Software development workshop specialising in the build of complex, scalable applications and websites. Following Artirix he eventually founded Plandek with Charlie.

Will is a senior technology leader, specialising in digital transformation and leading cross-functional delivery teams. He has over 15 years of global experience built on digital delivery expertise, operating models, developing talent, and helping businesses shape and deliver technology-enabled business transformations.

Will joined the Plandek leadership team from Deloitte in March 2019. He is passionate about helping our clients build high performing, motivated delivery teams, and works closely with them to identify their biggest delivery challenges, form meaningful objectives, and find the right metrics to drive success.

Jef has been building, leading and mentoring engineering teams around the world for over 20 years. His experience has spanned industries, technologies and cultures. Through the adoption of Agile methodologies, DevOps practices and Cloud technologies he’s enabled numerous companies to deliver successful outcomes.

Jef’s passion for the continuous improvement of people, processes, organisations and technologies led him to embrace a data driven approach. Like most engineering leaders, he struggled to find an efficient and objective means to collect the data he was after. His initial efforts led to a web of Jira exports, spreadsheets, graphs and manual intervention. He joined Plandek in August of 2021 to help deliver the tools that he wanted for his own teams.

With over 15 years of sales experience, Dieter has worked in various industries selling both products and services. Selling mainly into enterprise customers Dieter, has climbed his way up the ranks from an SDR through to Head of Sales. Dieter has a wealth of experience building SDR & sales teams in the software industry. At Plandek he’s been responsible for leading the sales function including the SDR team.

He’s passionate about software and helping his clients to achieve better outcomes by leveraging data insights that truly make a difference. A keen meditator, MMA fan, and all-round happy chappy, Dieter brings a palpable energy to the team.

Luke has over 10 years’ experience delivering software products in a host of industries. He’s worked in every aspect of software development from product inception all the way through to delivery and support.

Luke started out as the Head of Customer Support at Globrix before moving quickly into Project management as the business expanded. He then became Head of Product at Artirix where he was responsible for the development of the platform alongside the delivery of key client projects.

Luke joined Plandek over a year ago, and works tirelessly with the team to ensure we build a product to improve the working lives of delivery leads.

Plandek delivers a new level of actionable insight in near real time. As a result, our clients often ask for consulting support to help implement the opportunities for improvement revealed by Plandek.

If you require more extensive consulting support, we engage our trusted consulting partners.

Fill out the form below to book a demo. Or use our Slack community channel to speak to one of our delivery experts.

Connect on Slack
We use cookies on our website to give you the most relevant experience by remembering your preferences and repeat visits. By clicking “Accept All”, you consent to the use of ALL the cookies. However, you may visit "Cookie Settings" to provide a controlled consent.
Cookie SettingsAccept All
Manage consent

This website uses cookies to improve your experience while you navigate through the website. Out of these, the cookies that are categorized as necessary are stored on your browser as they are essential for the working of basic functionalities of the website. We also use third-party cookies that help us analyze and understand how you use this website. These cookies will be stored in your browser only with your consent. You also have the option to opt-out of these cookies. But opting out of some of these cookies may affect your browsing experience.
Necessary Always Enabled
Necessary cookies are absolutely essential for the website to function properly. These cookies ensure basic functionalities and security features of the website, anonymously.
Functional
Functional cookies help to perform certain functionalities like sharing the content of the website on social media platforms, collect feedbacks, and other third-party features.
Performance
Performance cookies are used to understand and analyze the key performance indexes of the website which helps in delivering a better user experience for the visitors.
Analytics
Analytical cookies are used to understand how visitors interact with the website. These cookies help provide information on metrics the number of visitors, bounce rate, traffic source, etc.
Advertisement
Advertisement cookies are used to provide visitors with relevant ads and marketing campaigns. These cookies track visitors across websites and collect information to provide customized ads.
Others
Other uncategorized cookies are those that are being analyzed and have not been classified into a category as yet.
SAVE & ACCEPT
Powered by

Commits without a pull request

If your process defines that every commit should have a related pull request, then this will tell you when they don’t

Written by Will Lytle

This metric will highlight the percentage of code commits made to your default branch that do not have a related pull request. Based on the date of commit the default view is to plot this percentage over time, as below:

As with all our metrics we have a broad selection of breakdowns and filters to allow you to tailor Commits without a Pull Request to your various needs.

The first two options below are based on the commit data itself – Committer and Repository. Useful to be able to drill down on where this PR process is being used or not.

The other options, prefixed “Ticket”, are pulling in the fields for related tickets that are referenced in those commits. For further detail see Commits without a Ticket Reference.

So where ticket linking is in place you’ll be able to gain unique perspectives of this metric based on attributes like Issue Type, Epic Link or Fix Version etc. 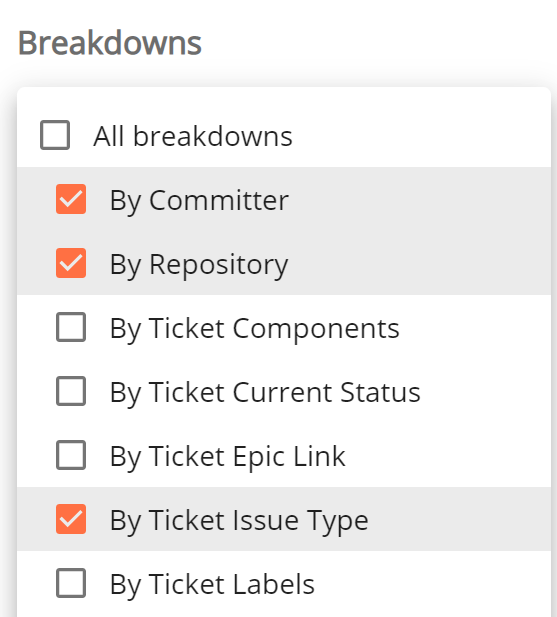